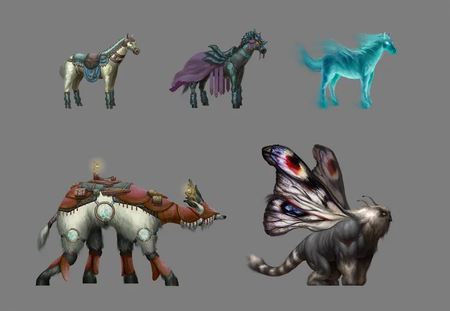 Mounts are obtained through an early quest that is available to players in starting areas.[1]

We kind of want mounts to be ubiquitous for people.[8] – Peter Pilone

Mounts will have different core attributes and stats.[9]

Certain mounts will have combat abilities.[12]

Dragons are epic flying mounts with strong battle abilities, such as AoE breath attacks, swooping flyby attacks, and others.[14][5]

We want to make sure that it's not cumbersome to quickly mount a steed and start moving... Steeds play a very important role in mobility.[15] – Steven Sharif

Mounts are items that players carry then activate to summon the mount nearby.[7]

Mounts are going to be items that you will be able to carry on your character and activate to summon the mount in front of you or near you; where you can then ride the mount.[7] – Steven Sharif 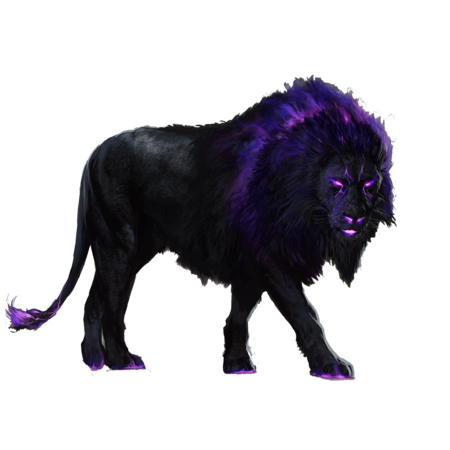 Land mounts (Ground mounts) are tier 1[4] mounts that are obtained through an early quest that is available to players in starting areas.[1] 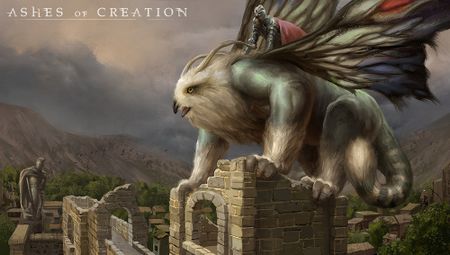 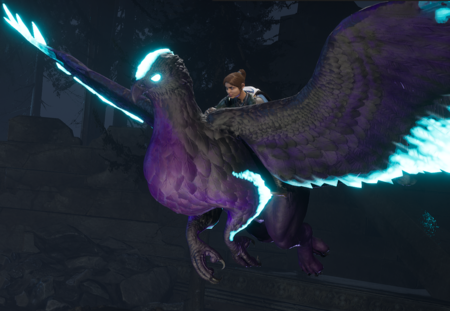 Royal mounts are a tier 3[4] class of mounts available to Mayors of metropolis nodes and Kings and Queens of Châteaux de guilde. Royal mounts can also be dropped from legendary world bosses.[5]

Generally flying is not something that we're going to be doing in this game and there's a lot of reasons for that: Some of it is economic, some of it is ... you create this really great looking world and we don't want you flying over all the time.[19] – Jeffrey Bard

There are different types of royal mounts.[5]

Dragons are a class of these royal mounts. You can get different types of royal mounts. They don't have to be dragons. They could be some other type of legendary mythical creature... It will be an epic looking large-scale creature and people will notice you and it while you are approaching.[5] – Steven Sharif

The guild leader of a castle can grant the use of flying undermounts (such as wyrmlings) to guild officers during a castle siege.[25][26][27]

Little wyrmlings that you can grant to officers if you're a castle owner, and they can fly around too.[25] – Steven Sharif 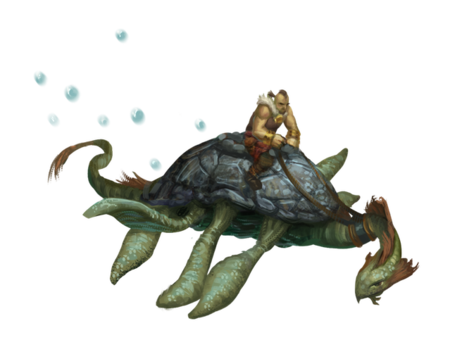 Aquatic mounts are able to be obtained from taming underwater creatures.[30] 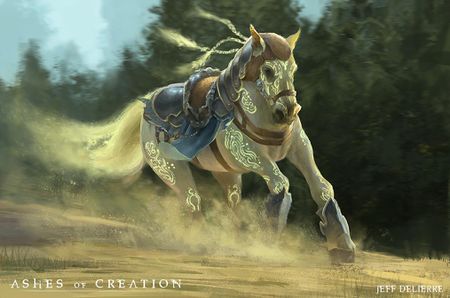 Kickstarter/Summer crowdfunding mount rewards are obtained and utilized by applicable backers in the following way:[1] 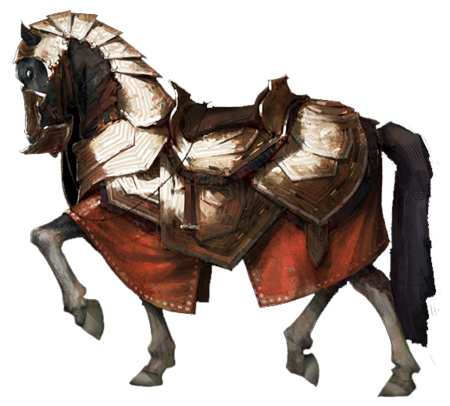 Mount barding cosmetic reward for backing at the Leader of Men level.[31]

Each race has a unique mount.[2]

Multi-passenger group mounts were unlocked during the Kickstarter crowdfunding campaign.[33][34]

The group mount is gonna be a very difficult mount to achieve, but once achieved it's gonna be very fun and and pivotal in gameplay. So the idea there is to have them grand.[35] – Steven Sharif

Mounts and pets are dropped by world bosses on a very rare basis.[36]

Temporary mounts that drop from bosses will age and eventually die.[37]

Mounts and pets are able to be named by players.[38] 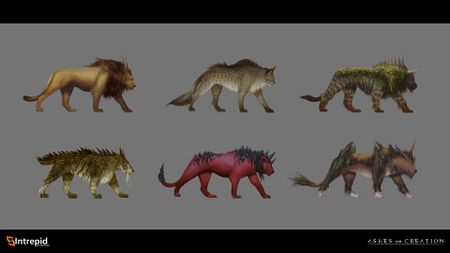 Animal husbandry is a profession within the processing artisan class.[39]

Many animals that can be tamed and bred through the animal husbandry profession can be found in herds across the lands of Verra. These herds represent a gatherable resource, of sorts, that masters of the animal husbandry profession may then use to discover lesser-known species variants with untold powers and abilities. Mounts play a large role in Ashes of Creation, and animals like the horse are an early gateway into the unlimited possibilities that await those skilled in the arts of husbandry.[40] 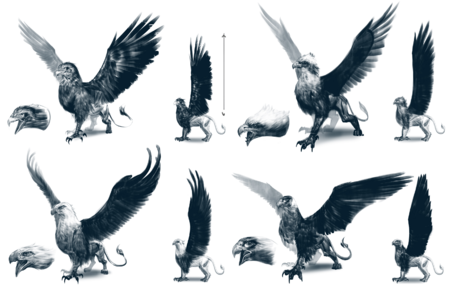 These are some concept iterations of exactly how the animal husbandry profession's going to work as you create the offspring of different combinations of animals and you find and discover types of mounts. For example this Gryphon: You will have the ability to open up an in-game character customization screen for the animals; and you'll be able to use certain dials to touch different aesthetic aspects of the actual animal's features: On its wings, on its head, its beak, its armor that's going to be present; the claws and talons. You will be able to actually make a unique representation of this mount, so you're just not a cookie cutter like everybody else.[43] – Steven Sharif

Animal husbandry will have discoverable blends of breeding.[44]

There is a compendium of acceptable parameters for breeding, which isn't going to be known until players discover it.[47][49] This discovery may be different for different players.[49]

Animal husbandry involves a tree of its own that players get to discover via what pairings they choose... That's going to be a pretty fun aspect of creating rare mounts that haven't been seen in the world.[50] – Steven Sharif

Genetic lines are based on the type of mount or creature that has been captured or tamed.[41]

Each of these animals have a unique ID. There's going to be essentially this husbandry chart that takes into account potential combinations between animals that you have. So there's gonna be a little bit of obviously trial and error as players begin to explore this genetic system to determine what yields are possible; and those yields are obviously going to have an element of RNG to them as well. So you know you may pick up on a more dominant genetic trait within the pairing, or you may have a much smaller chance to unlock a specific breed of species; and then those chances obviously get augmented by your advancement within the Animal Husbandry profession. So a person who's more experienced in pairing of certain animals, and even the specific types of pairings, will increase their likelihood- their RNG chances of essentially birthing a unique mount; and being able then to sell those on an open auction. They can also be applied as certificates toward the construction of particular caravans as well.[47] – Steven Sharif

There are stages of development within breeding.[51]

There's definitely going to be odd combinations, whether it's a butterflyger, giraffealope I don't know, but there will be definitely caps that are present.[49] – Steven Sharif 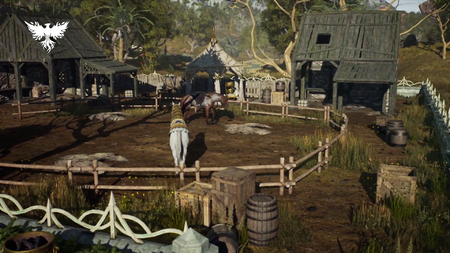 Alpha-1 early example of the first tier of animal husbandry stables on a freehold plot.[52]

Players will be able to place the animals they are trying to focus on from a Husbandry perspective within the stable area and then over the course of time are going to be able to yield some type of results out of those parings.[52] – Steven Sharif

Stables in Ashes of Creation refer to:

Royal stables are a type of building in Ashes of Creation.[5]

The royal mounts will be the only class of mounts that can fully fly in the world; and they are will be needed to be mounted while in a royal stables. Royal stables are a building that can be built in a node if elected to be built by the mayor and supported by the community building it up through the quests to do so; and castles come with a royal stable as well. So once you have a royal stable and you become that Mayor or King or Queen, you may then mount the creature there and then take it wherever you wish.[5] – Steven Sharif

Faster travel in Ashes of Creation refers to.[54]

Even though there's not fast travel, there is faster travel. So you know mount ridden. There will be connection points between certain nodes via the use of like flying automated creatures that you can use. Stuff like that.[54] – Steven Sharif 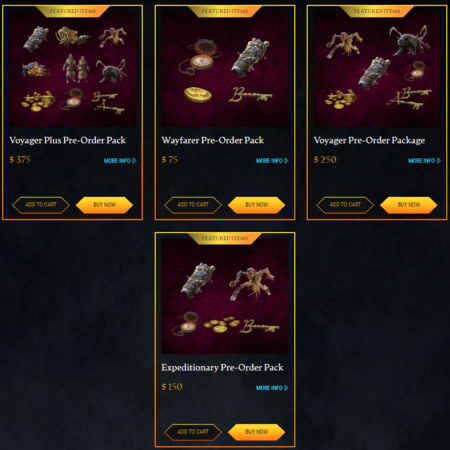 We plan to include a shop for micro transactions. The shop will only include cosmetic items. Nothing in our shop will ever be pay to win as we believe this practice greatly hurts the MMORPG genre.[59]

All cosmetic store items will be non-tradeable.[63] There will be no gifting mechanism for cosmetic items.[64]

I don't want cosmetic items that can be purchased from the market to be transferable... because it is in a way a transfer of money for potentially something in-game.[64] – Steven Sharif