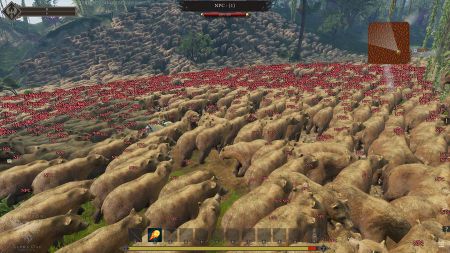 Performance optimization when rendering 1300 simulated actors utilizing merged materials and meshes in Unreal Engine 5 Nanite.[6] This test was confirmed post-stream to be running on a RTX 3070.[7]

What you're seeing here showcases the new modular appearance component which can combine any set of meshes and materials into a single mesh and single material at run-time. What you're looking at is over 1300 different entities, different actors. These are simulated players essentially. Previously you saw the example they were just standing still. There was no animation, there was no effects, there was no environment and it was a thousand. This is thirteen hundred playing animations, playing effects, plus the environment which is Nanite in this example. So what you're seeing is all of these players moving around and doing something and you're seeing the frame rate at about 30 on Clayton's rig.[8] – Steven Sharif

Here you see that the FPS in the top right corner is like seven or eight on average, so not too good from a rendering perspective... So by merging now you can see that the same thousand players who are wearing the same armors as previously are actually having a 300 percent increase- 300 to 400 increase- in the performance of the of the FPS. So it went from 7 to about 21 on average and that is a significant optimization point that obviously this is just the beginning of the optimization efforts.[9] – Steven Sharif

There's a lot of bells-and-whistles that are intended on the client rendering side for these types of features that players will have the ability to scale up or down or off from a performance perspective.[12] – Steven Sharif

A "default player appearance" may be automatically applied during sieges or other large scale battles to improve client-side performance.[16][17][13]

We have taken into consideration the rendering and server performance expectations with regards to our character density for events and battles. While testing will help with these performance profiles, we feel good where it is at for the moment, and do not feel we need to compromise our design goals atm.[18] – Steven Sharif

Lumen has done a great job in really bringing to to life this area. As you can see, there's light bouncing off of the surfaces and casting into the rest of the cave... I love how you can also see the detail in the costume and the cloth that we have now.[19] – Steven Sharif

Unreal Engine 5 is the graphical engine for Ashes of Creation.[19][20] The game was originally developed in Unreal Engine 4.[21] Migrating to UE5 required some front-end work, but in the long run it will be easier to do so in the alpha phases of the game, rather than closer to release, or post-release.[22][23] The developers expect that the transition to Unreal Engine 5.1 to be complete in February 2023.[24] This was previously slated for January 2023.[25]

What it provides in my opinion as person who enjoys PvP is it adds additional dynamics to what is possible from your opponent or from yourself. You know, if there is a ledge and jumping off that ledge is going to deal a lot of damage to me when I hit the ground and that puts me at a significant disadvantage, maybe I have an option to jump off the ledge at a point where I can mantle onto the side of a cliff or something. Now the give and take there is I won't be able to use my skills while I'm mantled. I won't be able to react easily, but I didn't have to take the fall damage per-se. Or if there's an obstruction and you know I'm going to take a significant reduction in speed so that I can crouch and make it past that, and now I have a effective line of sight has been obstructed as a result of that decision. I think it adds interesting elements to the battlefield and the key here is going to be making sure that it's not cumbersome- that it doesn't feel opposite of the flow of combat.[26] – Steven Sharif

Nanite brings us really an entirely new approach to rendering and art workflows. Now we can render more actors with extremely high detail while eliminating the need to bake out normal map textures. For artists essentially what this means is that they can import high quality sculpted meshes directly into Unreal 5 without really having to reduce the poly count, making the workflow more efficient while simultaneously improving the quality of the art.[31] – Steven Sharif

Lumen is going to greatly improve the visual fidelity and performance of the game with the reduced work and effort that's required by the art team, making Ashes of Creation much more beautiful than in UE4.[28] – Steven Sharif

Q: How does this upgrade to UE5 affect the Ashes of Creation release timeline?[22]

A: While UE4 is a great engine, there are certain focuses and technological endeavors that Epic is doing on UE5 that won't necessarily be supported by UE4; and we want to make sure given the lifespan of Ashes and how long we intend this MMO to last, that when we made this decision early on during the development process that we weren't going to exacerbate the amount of effort it would take to move over later in the lifespan or after launch.[22] – Steven Sharif

One of the most important things about Epic Games as the creators of Unreal Engine is the way they've allowed developers to have access to the source code. To be able to do that makes the engine very versatile.[34] – Steven Sharif

Over October and November, that's when McP and the engineers began to do the base migration of our custom code-base into UE5 see where there were any major issues. The great thing about UE5 is that it's mainly focused around updating the renderer- giving access to Nanite, Lumen global illumination- those are big components. There's other great aspects of it, but really it's a front-end change and it doesn't affect our networking layer. It doesn't affect our back-end code.[35] – Steven Sharif

Ashes of Creation will be released on the Windows PC platform.[37][38]

Q: Will the upgrade to UE5 affect the supported systems? A lot of people are like linux question mark.[37]

A: It's something that we'll evaluate in the future. I haven't ruled it out necessarily- would see how much work it would take to do that, but really like less than one percent of the player base is using Linux.[37] – Steven Sharif