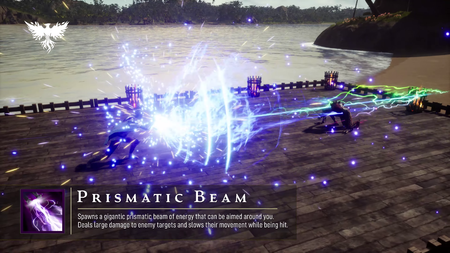 As a reminder these are early works in progress, and represent lower level spells for our Alpha One playtests. One important thing to note, the speed of casting is not augmented by buffs in this video. So as many of you may know from the many mmos we all play, lower level casting can tend to be slower than the casting at higher levels due to passive augments and active buffs that can be applied. This will speed up cast times and overall combat for casters (and across all classes).[4] – Steven Sharif

Rank 1
Spawns a giant prismatic beam of energy that can be aimed around you. Deals large damage to enemy targets and slows their movement while being hit.[1]
Rank 2
Damages over time after channel.[5]
Rank 3
Damages enemies between caster and target in a cone.[2][5]